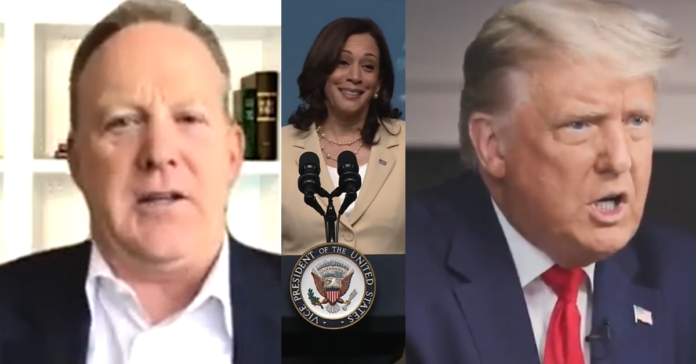 Former press secretary and adviser to former President Donal Trump just confirmed the worst kept secret in Washington and issued a warning to Vice President Kamala Harris in the prcess.

Sean Spicer broke his silence on Trump’s future plans saying Trump will run and giving Joe and Kamala’s early stumbles one of the reasons why.

“A couple of months ago I wasn’t sure,” Sean said. “Now, there needs to be something that will keep him out.”

Spicer said the months of bumbles by the Biden White House, especially on issues Trump cares deeply about like immigration, made Trump look beyond the 2022 midterm elections during which he plans to be a “kingmaker.”

“He’s in,” Spicer claimed of Trump’s interest in the race during a recent Washington Examiner interview.

Spicer reportedly remarked that Trump’s appetite for the presidential election had been bolstered over the last several months, after watching Joe Biden’s handling of issues such as immigration.

“A couple of months ago, I wasn’t sure,” Spicer said of a Trump run in the interview. “Now … there needs to be something that will keep him out.”

The Examiner does not state whether Spicer is giving his opinion or whether he has spoken to the former president or has definitive word from his inner circle, or similar information.

As Trump’s first White House press secretary, Spicer faced doubts over credibility when he addressed the media, and hence the public, from the podium in televised briefings.

He has since claimed that he didn’t “knowingly” lie to the American public.

Trump's former press secretary and adviser said the former president is set to make a return bid for the White House.