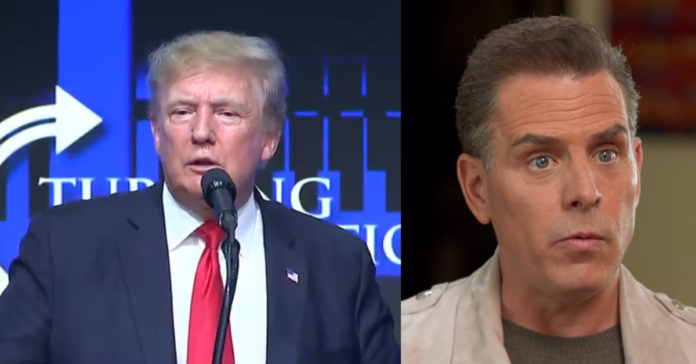 Former President Donald Trump dropped the hammer on President Joe Biden for allowing walking scandal Hunter Biden to sell his art to anonymous buyers saying it is a “100 percent bribe.”

“What about Hunter Biden getting a half a million dollars per painting, and he never painted before?” Trump said last night in Arizona. “Could you imagine if my kids did that?” Trump joked that street artists in New York City’s Central Park make better art than Hunter Biden before calling out the Bidens.

“Hunter Biden’s getting $500,000,” Trump said. “It’s a bribe. It’s disgraceful, and the fake news media is talking about it like it’s okay, but we should have transparency. It’s unbelievable.”

“Now they’re justifying it, Well, we want to make it non-transparent. No, actually you should make it transparent, I guess,” he said of Biden’s plan to keep the buyers anonymous.

“We believe that Hunter Biden, just like any child of a president, should be able to pursue their professions and their passions,” White House press secretary Jen Psaki said to reporters last week trying to spin the unspinnable.

“We believe that Hunter Biden, just like any child of a president, should be able to pursue their professions and their passions,” White House press secretary Jen Psaki said to reporters during the daily briefing.

CBS News reported that Hunter Biden will meet with possible art buyers during two art shows in Los Angeles and New York City – even though the buyers of his paintings are supposed to be anonymous.

Psaki said Hunter Biden had agreed not to discuss the sale of his art while meeting with prospective buyers.

“We believe this is a reasonable system that has been established that allows for Hunter Biden to work in his profession within appropriate safeguards,” she said.

Psaki said the gallery would handle the transactions and sales for Hunter Biden’s paintings.

She dismissed the idea that it was important to disclose the buyers of Hunter Biden’s art for the sake of transparency to ensure there was no corruption surrounding the transactions.

Former President Trump: "Hunter Biden's getting $500,000 [for his art]. It's a bribe, it's disgraceful, and the fake-news media is talking about it like it's ok." pic.twitter.com/LBYxAsOWT4