Trump Confirms Chuck Schumer’s Worst Fear, Says Herschel Walker Will Run For Senate In Georgia: “He told me he’s going to, and I think he will” 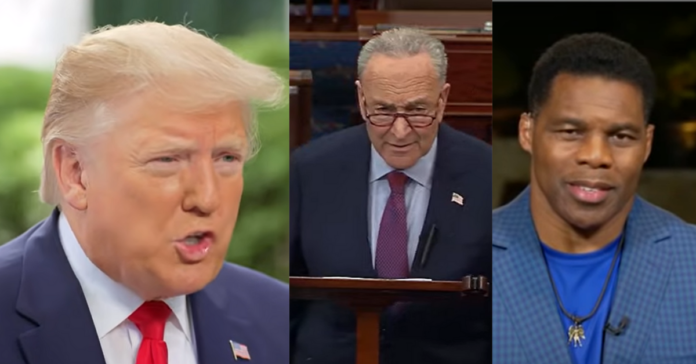 Former President Donald Trump put the fear of God into Chuck Schumer and said football legend Herschel Walker told him that he would run for Georgia’s Senate seat in 2022. “He told me he’s going to, and I think he will,” Trump said.

“I think he’d win,” he added. “I think it would be very, very hard to beat Herschel. Beating him would be very tough. And I think he’s going to run.” Chuck Schumer cannot afford to lose one Senate seat if he wants to stay in power and most experts agree Walker would be a challenge from current Democratic Sen. Raphael Warnock who barely won the seat in a runoff in January.

Walker, who recently attended Trump’s private birthday celebration, has not indicated when he’ll announce a decision. But the mere possibility of him running is enough to leave other would-be candidates in a holding pattern in a state where Democratic victories in 2020 highlighted Republicans’ narrow margin of error.

The GOP bench most notably includes former Sen. Kelly Loeffler, who lost a to Warnock in a January special election runoff, and U.S. Rep. Buddy Carter, a four-term congressman from near Savannah who has never run statewide.

Eric Tanenblatt, a top national Republican fundraiser and a principal at the law firm Dentons, called the GOP indecision “unfortunate” and warned that Warnock, the first Black senator from Georgia, will be a “formidable candidate” with a fundraising head start and no significant primary opposition as he seeks his first full Senate term.

“I guess my hope is that if Herschel does it, he decides to do it sooner than later,” Tanenblatt said. “You have people waiting to jump on board, but it almost becomes a little too late.”

Walker, 59, stirred fresh speculation about a Senate bid with a recent social media post showing the longtime Texas resident beside a car with a Georgia license plate. In the video, Walker declared himself “ready” to “run with the big dogs.” But he has not set up any visible political operation in Georgia, and it’s still not clear he’s re-established residency in his home state. He had no presence at the annual state Republican convention or district and county conventions earlier this spring, leaving some Republicans frustrated.

“You’ve got to get out there and meet people, and it takes time to do that” in an expansive, populous state, said Jack Kingston, a former south Georgia congressman and 2014 Senate candidate. “Republican primary voters get mad easily if you don’t come to their events, even if you’re Herschel Walker.”

That’s a contrast to a handful of declared candidates, led by Gary Black, the longtime state agriculture commissioner, and would-be candidates like Loeffler and Carter.

Loeffler, who had been the Senate’s wealthiest member, has traveled the state since her defeat to pitch her new political organization, Greater Georgia. She bills it as a conservative retort to Democrat Stacey Abrams’ Fair Fight group.

The former senator also met recently with McConnell to talk about running again.

Big tech is silencing Republican voices but we are here to help keep you informed by hunting down real news and sharing it with you. If you like the content we share please feel free to subscribe to our newsletter, this story was shared from The Scoop.