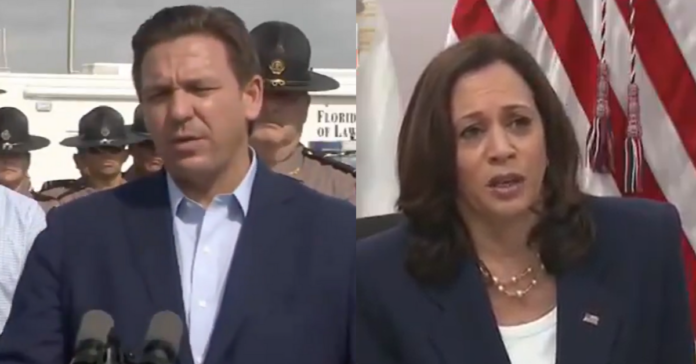 Florida Gov. Ron DeSantis (R) upstaged Vice President Kamala Harris by sending 50 police officers to help enforce the U.S.-Mexico border in Texas on the day she finally went to the southern border for a visit.

“When the Governors of Texas and Arizona reached out for help, Florida answered the call,” said Governor Ron DeSantis. “We are witnessing a catastrophe at the southern border under the Biden Administration. In recent months, we have seen people from the terrorist watch list, known sex offenders and a flood of fentanyl cross over the border. This is a national security crisis, and we must get it under control.”

“That is still a point of discussion,” DeSantis said at a press conference in Pensacola. “Typically, if someone would help us, you know, we would pick up some of their funding and so that is how we would hope that it goes. But we do not anticipate getting any federal funds.”

“We look forward to seeing them in action. Hopefully, I will be able to get out there at some point and wish them well when they are on the ground,” DeSantis said, noting that the officers will be ready to work on Monday.

“We are unable to share mission specifics at this time to protect the security of the missions they are working on,” said Katie Strickland, a spokeswoman for the governor.

“I thank our FDLE agents and analysts who volunteered for this mission, being away from their families during the July 4th holiday,” said FDLE Commissioner Rick Swearingen. “Their work benefits our citizens by helping secure the border from the violent illegal aliens and human traffickers who illegally get into our country and find their way into Florida, like the drug trafficker who shot our agent earlier this month. These FDLE members thoroughly exemplify our first core value of ‘Service’ in their selfless decision to forgo enjoying barbecues and fireworks with loved ones so they can help defend their fellow Floridians and Americans on the anniversary of our nation’s birth.”

“I appreciate the members of the Florida Highway Patrol who have volunteered to represent the state of Florida and answer the call to assist fellow law enforcement agencies along the southern border,” said Florida Department of Highway Safety and Motor Vehicles Executive Director Terry L. Rhodes. “I thank Governor DeSantis for his leadership on this issue and his continued support of law enforcement.”

“Our training and equipment allow us to provide assistance in challenging remote locations,” said Colonel Roger Young, director of the FWC’s Division of Law Enforcement. “We appreciate Governor DeSantis’ bold leadership on this issue, and we stand ready to support Texas as needed. Public safety is our number one priority.”

Kamala Harris caused even more controversy when she finally went to the border by snapping at a Fox News reporter who asked what took her so long before blaming Trump for the border crisis. “We inherited a tough situation…In five months we’ve made progress,” Harris said.

“I said back in March I was going to come to the border, so this is not a new plan,” Harris told reporters after landing in Texas.

“Coming to the border is about looking at the effects of what we have seen happening in Central America,” she said.

“They believe that is something that can win them seats in 2022, so of course they’re going to play it up,” she said of the GOP who have relentlessly criticized her. “They’re going to try to make it an issue.”

“When you’re there, you see balconies, they were stacked one on top of the other. It just went straight down like a pancake. That’s an unbelievable type of collapse. Then as you get closer you see how some units were ripped off the side.

“You think to yourself, you may have had two kids in bed that night. It was a traumatic experience for the folks who escaped. There are a lot of families.

“The search and rescue does go on. It’s a really difficult situation and a real tragedy for our state.”