Pelosi gets nasty greeting in England: Protesters shout 'Trump won,' 'Get back to Epstein's island' 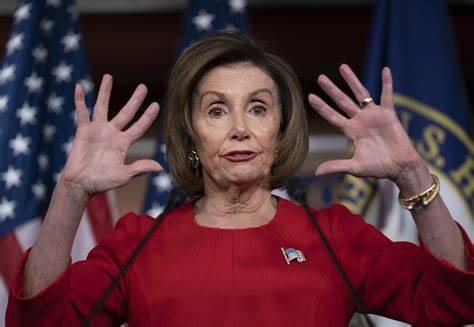 It wasn’t exactly the welcome wagon for Speaker of the House Nancy Pelosi in jolly old England, with protesters shouting, “Trump won” and “Go back to Epstein Island” during the California Democrat’s visit to the northern part of the country on Saturday.

"Shame on you!" another person shouted.

Other cries included, “You’re not welcome here! Go home!" and "Get back to Epstein's island! Get back to Jeffrey Epstein's pedo island, Nancy!”

The meaning behind the latter reference was unclear. No reports in major media have indicated the speaker traveled to Epstein's island.

Pelosi, who was in the United Kingdom for a conference of Group of Seven nations' heads of parliament, used her visit to bash former President Donald Trump and Republicans while making several tone-deaf statements at odds with reality.

Because nothing says class like disparaging your political opposition from foreign shores.

During a moderated conversation at the Cambridge Union Society at Cambridge University, Pelosi said the Republican Party has been “hijacked” by Trump and has become a “cult."

“I say to my Republican friends -- and I do have some -- take back your party," she said.

That prompted chuckles from the audience, although it’s unclear if they were laughing with Pelosi or at her.

Another pearl of wisdom dropped by Pelosi during her Cambridge talk was downplaying the Chinese government’s genocidal efforts against its Uighur population for the sake of fighting the change in climate previously known as global warming.

“Having said all of that …we have to work together on climate. Climate is an overriding issue and China is the leading emitter in the world, and the U.S., too, and developed world, too, but we must work together. So we can have a level of communication, whether it’s COVID, whether it’s terrorism, or whether it’s climate," she said

More hot air was emitted from Pelosi during her appearance at Cambridge in the form of her ludicrously optimistic appraisal of President Joe Biden’s foreign policy.

It appears the 81-year-old Democrat’s relationship with the truth is tenuous at best, in that despite last month’s botched withdrawal of U.S. forces from Afghanistan — where Americans are still trapped, by the way — Pelosi said Biden is “perfect” and “knows his foreign policy.”

Perhaps Pelosi can take some comfort in the fact she is not the only Democratic politician to be mercilessly heckled recently.

The president himself has been the target of several “F*** Joe Biden!” chants at college football games over the last several weeks.

Big tech is silencing Republican voices but we are here to help keep you informed by hunting down real news and sharing it with you. If you like the content we share please feel free to subscribe to our newsletter, this article was shared from WND