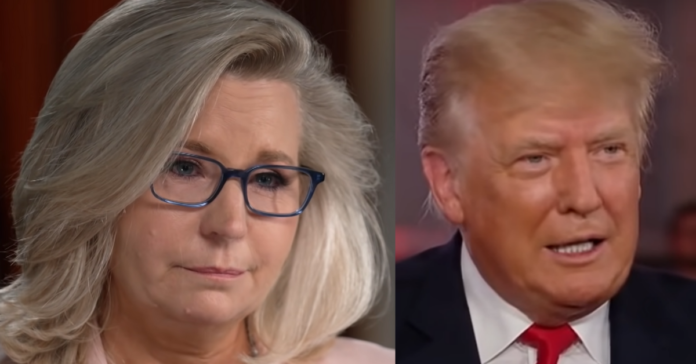 Liz Cheney fired back at former President Donald Trump in a new 60 Minutes interview where she tried to say voting against her, and for the Trump-backed candidate in her primary, is a vote against the constitution.

Lesley Stahl: But most Republicans in the House see what you’re doing as a betrayal. They look at Nancy Pelosi– even you have said– you said this, I’ve got a quote here. You said, “The Democrats under Nancy Pelosi’s leadership have become the party of antisemitism, infanticide, and socialism.” Direct quote from you. And yet, here you are. It’s considered Nancy Pelosi’s committee. Lesley Stahl: Republicans in Congress feel that by joining this January 6 panel, you are helping to keep the focus on Trump instead of on the shortcomings of the Biden administration.

Liz Cheney: Those who think that by ignoring Trump, he will go away, have been proven wrong.

And in my view, the American people, they deserve better than having to choose between what I think are the really disastrous policies of Joe Biden– in a whole range of areas, really bad for our economy.

From a national security perspective, what’s happened, what he’s done in Afghanistan: very dangerous policies for the country.

But the alternative cannot be a man who doesn’t believe in the rule of law, and who violated his oath of office.

Lesley Stahl: Most Republicans we’ve spoken to feel that you miscalculated, that you didn’t figure out ahead of time that it was going to be this intense, this hot, this perpetual.

Liz Cheney: You know, it wasn’t a calculation.

Lesley Stahl: There wasn’t a yellow pad with the pros and the cons and–?

Liz Cheney: No. It was: This is what– what he has done.

Liz Cheney: I watched while the attack was underway– understood very clearly what he did on January 6, what he failed to do on January 6.

Instead of stopping the attack while it was underway, he was busy calling up senators trying to get them to delay the count.

So, there was no calculation. I think he’s very dangerous. Lesley Stahl: The Republican Party here has disowned you. They’ve called for your resignation.

We’ve been told your approval rating here is down around 30%. Can you win this seat?

Liz Cheney: Absolutely. I think it’s going to be the most important House race in the country in 2022.

And—and it will be one where people do have the opportunity to say, “We want to stand for the Constitution.”