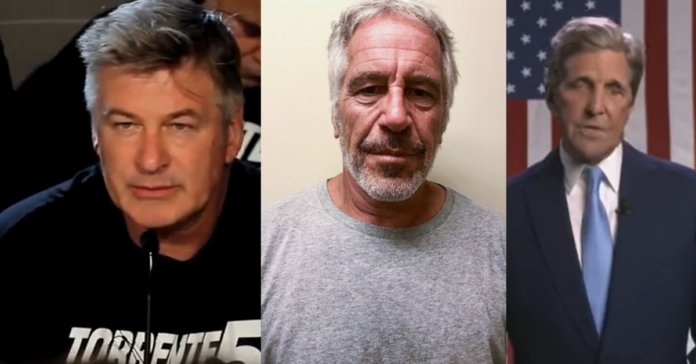 Stunning reporting from a New York media outlet just sunk Hollywood hothead Alec Baldwin and failed presidential candidate John Kerry. New York Magazine got their hands on of Jeffrey Epstein’s little black books and while Bill and Hillary Clinton need to come clean about what they knew and when did they know it, so do some others.

Like John Kerry and Alec Baldwin who got the bad news that their names are in Jeffrey Epstein’s little black book. Disgraceful but not surprising.

Kerry had seven phone numbers listed in the book including the direct line to his losing presidential campaign. New York Magazine went through the book and listed some of the big and shocking names with some details of the relationship to Epstein.

From NYMAG: Baldwin, Alec: Actor. Name found in Epstein’s black book. Denies knowing Epstein, though he appears in the black book. Recently, Baldwin invited Julie K. Brown, the Miami Herald reporter who resurfaced the Epstein story, to do a podcast.

Black, Conrad: Media mogul. Name found in Epstein’s black book. He’s perhaps best known for being sentenced to 42 months in prison for fraud, then writing a book about Trump and receiving a pardon. Vicky Ward, who profiled Epstein for Vanity Fair in 2003, said Epstein heavily leaned on Black, who is her ex-husband’s uncle (and was her ex-husband’s then-boss), to try to exert his influence on Ward.

The billionaire co-founder of Apollo Global Management and chairman of MoMA, Black made Epstein the director of his family foundation in 2001. The foundation continued to list Epstein as director on its tax forms until 2012, four years after he had pleaded guilty to soliciting a minor for prostitution in Florida.

The foundation now says that Epstein resigned in 2007 and that his name continued to appear on its rolls owing to a “recording error.” In 2011, he was listed as an investor in Environmental Solutions Worldwide, a Pennsylvania company, alongside several people close to Black, including his four children.

Black himself was seen with Epstein at a movie screening just a few months after Epstein finished probation in 2010, and Epstein was spotted at a party at Black’s home in the Hamptons as recently as 2015.

Blaine put on a private show for Epstein’s dinner guests in 2003, doing card tricks for the likes of Sergey Brin, Mort Zuckerman, and Bill Clinton aide Doug Band. The dinner was organized by Ghislaine Maxwell and included a group of young women who were introduced as Victoria’s Secret models.

The seven numbers listed for Kerry in Epstein’s address book include the direct line to his presidential campaign.

this couple worked for Jeffrey epstein for many years. John Kerry ? 👀👀 pic.twitter.com/NxRphPnifn

Big tech is silencing Republican voices but we are here to help keep you informed by hunting down real news and sharing it with you. If you like the content we share please feel free to subscribe to our newsletter, this story was shared from MAGAConservatives.