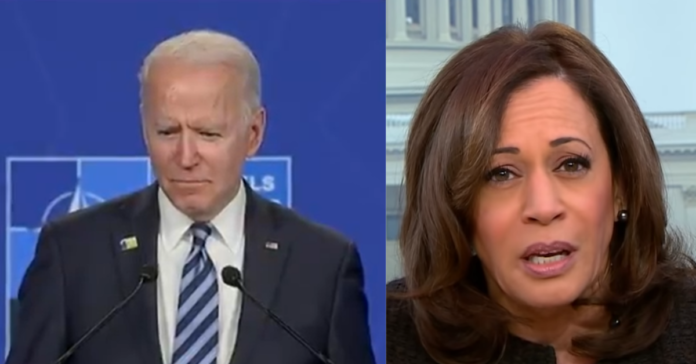 President Joe Biden got some bad news and saw his approval rating sink to below 50% for the first time according to a new Monmouth University poll. Since Biden was sworn in he has not dropped below 50% approval and with his legislative agenda in doubt, it looks gloomy going into 2022 for the Dems.

Biden currently holds a job rating of 48% approve and 43% disapprove. This is down from his

Prior Biden approval levels registered 51% in March and 54% in January. “Biden’s rating is still in net positive territory, but it seems to have taken a dip with the growing uncertainty that his signature spending plans will be enacted,” said Patrick Murray, director of the independent Monmouth University Polling Institute.

Biden’s large spending plans remain broadly popular, including the Covid stimulus plan passed early in his term (60% support), his proposed infrastructure package (68%), and his proposal to expand access to health care, college, paid leave and other services (61%). The current results are nearly identical to prior polls taken this year.

Just under half (46%) say these proposed plans should be passed as is, even if they do not get bipartisan support. This position is held by 80% of Democrats, but just 36% of independents and 18% of Republicans agree.

Another 22% of Americans say the plans should be significantly cut to get backing from both parties and 24% say they should not be passed at all even with bipartisan support.

…The poll also finds the public’s job rating for Congress has dropped to 21% approve and 65% disapprove from 35% approve and 56% disapprove in April. Congressional approval had been hovering between 30% and 35% since Biden took office.

The current reading is in line with Monmouth polls through most of the Trump years, when approval ranged between 16% and 25% except for two 32% marks in the early months of the pandemic last year.