Donald Trump Issues Warning To Joe Biden: “The Catholics are very angry, very angry at him” 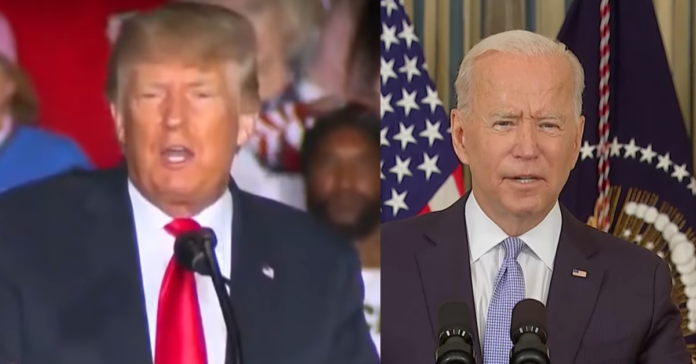 Church can be supportive of him.

“Now I got, I guess, 50 or 52% of the Catholic vote and I was very disappointed by that. I said, there’s no way. Evangelicals great, but they got it, they really got it. But the Catholics are very angry, very angry at him. “We had it the best ever in the history of that border, the southern border, and now it’s the worst in history and it’s probably the worst border, anywhere in the world if you think of it because no border has ever been like what’s happening at our border.

“It’s the destruction from inside of our country.

“It’s a disgrace what’s going on. This is just another continuation of really, you can call it the greatest witch hunt in history and a disgrace,” Trump said of the ongoing investigations into him and his business.

“I guess a bad call from a doctor or something, right?” Trump said about running in 2024.

“You get that call and say, ‘sir, how you doing? Come on down here and see us because we got a bad report, right?” he added.

“So things happen through God, they happen, but I feel so good and I hate what’s happening to our country,” he said. He’ll also do whatever is necessary to let everyone know that it was his administration that delivered a COVID vaccine to the country in record time.

But what about these mandates that have become so controversial? Does he believe they are discriminatory against the unvaccinated in this country?

“Since I left, I think people just don’t trust the Biden administration or Biden,” President Trump tells CBN News. “Since I left now you have the mandate fight and that’s a big fight by the way. You have to allow people their freedoms.”

Speaking of trust, the former president didn’t trust Dr. Anthony Fauci much so it begs the question. Does he regret not firing him during his time as president?

“He was there for like, 40 years or something, he was a part of the furniture,” Trump says. “But if you think about it, I really did pretty much the opposite of whatever he said… frankly, you can’t win that one. If I would have done it, I would have taken heat. If I didn’t do it. I would have. You know, it’s the same story. I did what I wanted to do, and I made the correct decisions.”

The Biden administration has said it "strongly supports" the Women's Health Protection Act passed by the House. https://t.co/ydiwPcztMb