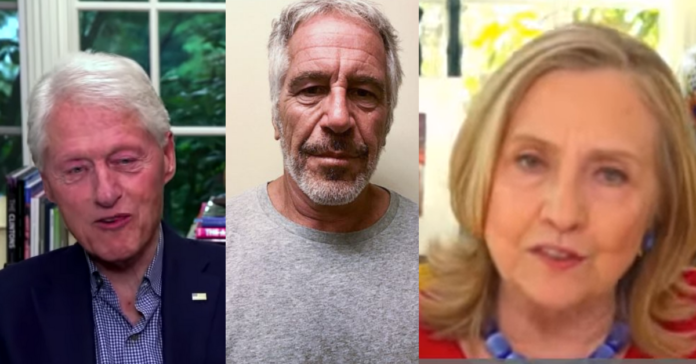 A new podcast reveals that Bill Clinton flew on Jeffrey Epstein’s private jet in February 2005 while visiting Japan, Taiwan, and China. These trips with Epstein and Maxwell have never been previously disclosed but one of the reporters who broke the Epstein story says she has the receipts.

Journalist Vicky Ward, who exposed Epstein for all the world to see and for the coverup that kept him out of jail, said Maxwell was part of the official Clinton party during a Clinton Foundation junket and even stayed at the same hotel as him.

Ward spilled the beans on her new podcast ‘Chasing Ghislaine.’ She has tapes and interviews and was sued by Epstein at one point.

The podcast claims that Maxwell used Clinton for her ‘escape’ from Epstein in the 2000s when her relationship with the financier was cooling.

Maxwell was considered by Clinton’s personal staff to be ‘just as important’ as Epstein for raising money for the Clinton Foundation and was the ‘go-to person’ when it came to asking for donations from the pedophile.

The claims put new focus on the friendship between the former President and Epstein, who hanged himself in 2019 while awaiting trial on sex trafficking charges.

Flight logs showed that Clinton took at least 26 trips aboard the ‘Lolita Express’ — even apparently ditching his Secret Service detail for at least five of the flights between 2001 and 2003.

The period where Epstein and Clinton were closest – the early 2000s – coincides with the period that Epstein was charged with running a sex trafficking ring.

According to ‘Chasing Ghislaine’, during the 2000s Maxwell was trying to escape the ‘sick partnership’ she had built with Epstein, who she dated during the early 1990s and allegedly abused underage girls with.

‘Remember, Clinton’s post-presidency was an exciting, very attractive place to be. He and an entourage went on fascinating trips to Europe, to Asia, to Africa and he met with extremely interesting people.

‘Now, records I’ve seen recently show that in 2003, Ghislaine visited the Taj Mahal with Bill Clinton and a group of around 20 others. This trip has not previously been reported. Jeffrey wasn’t on it. And that was key in cementing Ghislaine’s rise as a VIP in her own right in Clinton World, according to sources close to Bill Clinton’.

Ward claims that the trip in November that year was aboard a private jet owned by Ron Burkle, a close friend and billionaire who raised $10m for the Clintons before falling out with them.

A report on Kaiser Health News from November 2003 talks about Clinton visiting a generic drug maker to show support for lowering the cost of AIDS drugs.

Big tech is silencing Republican voices but we are here to help keep you informed by hunting down real news and sharing it with you. If you like the content we share please feel free to subscribe to our newsletter, this story was shared from MAGAConservatives.
Back to Conservative News
Use left/right arrows to navigate the slideshow or swipe left/right if using a mobile device