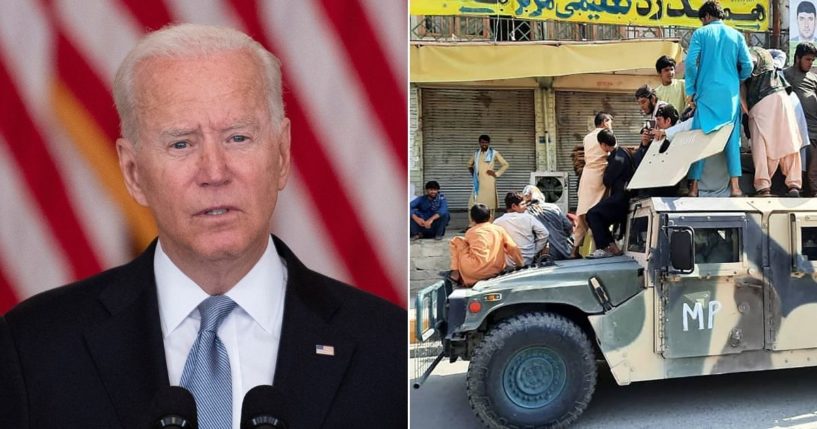 If there is one overriding theme that has characterized Joe Biden’s presidency, it has been his failure to fully consider the consequences of his actions.

The fall of Afghanistan over the last weekend is emblematic of many poor policy choices Biden has made to date.

They started on his first day in office with a slew of executive orders ending construction on the Keystone XL pipeline and oil drilling on federal lands, as well as halting construction of the southern border wall and ending former President Donald Trump’s “Remain in Mexico” policy.

Then, of course, came the $1.9 trillion American Rescue Plan Act, which the Democratic Congress passed and Biden signed into law in March.

This legislation, unlike previous COVID bills, garnered no Republican support, because so little of it actually had to do with addressing the pandemic.

There have been entirely predictable results from the policy choices Biden has made so far.

Inflation hit an annual 5.4 percent rate in July, matching a 20-year high from the previous month. Gasoline prices, which are up $1 per gallon from last year, are a major contributor to the inflation spike.

The massive government spending is also contributing to inflation because, in large measure, it’s being funded by the Federal Reserve printing money. Too many dollars chasing too few goods equals inflation. Pretty basic stuff.

The Congressional Budget Office projects the federal deficit will be $3 trillion for fiscal year 2021, as the national debt rapidly approaches $30 trillion.

This is clearly an unsustainable path, yet Senate Democrats, with Biden’s full support, voted last week for an additional $4.5 trillion, including a $3.5 trillion budget resolution of proposed new spending, primarily on new entitlements.

“That’s exactly what this is,” Moore told Fox News host Mark Levin over the weekend. “August 10, 2021, this past week, is probably going to go down in history as one of the blackest days in American Congress where the United States Senate voted for $4.5 trillion of additional spending. That’s the infrastructure bill, and this additional $3.5 trillion new Great Society program.”

“The big winner here is China because we are debilitating our own free enterprise system,” he added. “And if these kinds of trends continue, and I never thought I would be saying these words, China will become the world economic superpower because our own Congress is bankrupting our country.”

Which takes us to the border crisis.

The Department of Homeland Security reported that Customs and Border Protection encountered more than 212,000 migrants crossing into the country illegally in July, a 21-year high.

Biden, through lax enforcement and policy changes, more or less invited the entire world to move to the U.S., and over 1 million have taken him up on the offer so far.

On top of all these failures comes the Afghanistan debacle.

There are echoes of the fall of Saigon in April 1975 at the end of the Vietnam War, though Kabul seems even more chaotic.

In April of this year, The New York Times reported that Biden specifically rejected the counsel of his top military leaders to keep a modest force in Afghanistan as a check on the Taliban.

There were 2,500 troops in the country at the time, and the Americans had sustained no combat deaths in well over a year.

Instead, Biden announced the U.S. would be conducting a hasty withdrawal to be completed by the 20th anniversary of the 9/11 attacks next month.

So the military began to pull out, leaving behind State Department personnel and thousands of Afghan interpreters who had aided our war effort there.

We promised these interpreters the ability to immigrate to the U.S.

The order of departure should have been the other way around, of course, with the military leaving last.

Last week, Biden has had to order thousands of U.S. soldiers back into Afghanistan to secure the Kabul airport so the civilians can leave.

In another bad move, the president’s order to withdraw came during the heart of the fighting season in Afghanistan rather than the winter, when Taliban forces seek shelter.

When Biden came to office, he promised to re-establish America’s place on the global stage that Trump had supposedly tarnished or undermined in some way.

How does the experienced Biden look compared to Trump now?

“Peace in our time,” Chamberlain promised the people of the U.K. after striking a deal with Nazi Germany’s leader Adolf Hitler in October 1938 that split Czechoslovakia in two.

“I will begin by saying what everybody would like to ignore or forget but which must nevertheless be stated, namely, that we have sustained a total and unmitigated defeat,” he told the House of Commons.

“And do not suppose that this is the end,” Churchill added. “This is only the beginning of the reckoning. This is only the first sip, the first foretaste of a bitter cup which will be proffered to us year by year unless by a supreme recovery of moral health and martial vigour, we arise again and take our stand for freedom as in the olden time.”

Churchill was right. Nazi Germany disregarded the Munich Agreement and occupied all of Czechoslovakia months later and then invaded Poland in September 1939.

Under Biden, the U.S. has sustained a total and unmitigated defeat in Afghanistan, but it’s only the first sip of the bitter cup Americans will have to drink if his domestic agenda goes forward.

Republicans must regain control of Congress next year by large majorities in order to check the president’s worst impulses. The future of the country depends on it.